Google’s Title Rewrite Dropped Our CTR by Up to 37%! (Here’s How We Fixed It)

Google’s Title Rewrite Dropped Our CTR by Up to 37%! (Here’s How We Fixed It)

We’ve known for a while now that Google will sometimes change a page’s title in the SERP based on the query. But on Monday, August 16, many SEOs began noticing their titles being completely rewritten, in a detrimental way.

We, too, noticed this, as one of our top trafficked pages took a big hit from the change.

Needless to say, we were a little taken aback. So what’s going on here? We investigated and are sharing with you:

Special thanks to Elisa Gabbert and Gordon Donnelly for collaborating on this piece.

On Monday, we noticed that traffic to one of our long-standing top pages (our Free Keyword Tool) for the week of August 16-22 was down 25% compared to the previous week, with a noticeable drop-off between August 16 and 17.

When we started digging into this issue in our Search Console account, we saw that average position for the page in Google was steady, and impressions had actually increased, but the page’s organic click-through rate (CTR) had fallen sharply, from 33% to 26% for the top traffic-driving query—a 21% drop.

We saw a 21% drop in CTR for the top query to our Free Keyword Tool page, with no change in position.

It was then that Elisa Gabbert, our Director of Content and SEO, did a little further digging and noticed that Google had changed the title displaying on the SERP, from “Free Keyword Tool” to “Learn More About The FREE Keyword Tool.” This was not the title we had given the page—it was an H1 tag from a section pretty far down on the page. 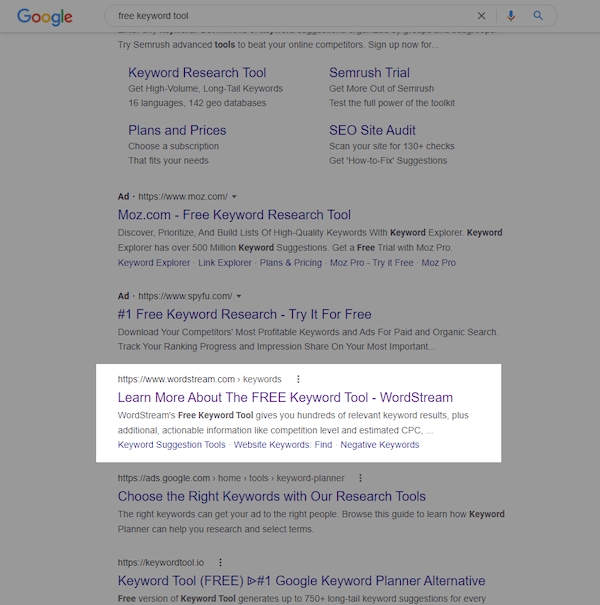 He also noted his observations that the rewritten titles seem to be shorter—not due to pixel limit but perhaps for readability purposes, and also to be able to include the brand name at the end of the snippet.

Danny Sullivan says this is not a new change

On August 23, Schwartz’s follow up article covered Danny Sullivan’s response to the feedback on Twitter. Here’s what Sullivan said.

He confirmed that Google has heard the feedback, but the change isn’t new.

“Suffice to say, we’ve heard the feedback & looking into all this. That said, it was never the case that writing the ‘perfect title’ guaranteed that title would be used. We have long used more than title tags for creating page titles. That’s not some new change…”

He reminded us that this isn’t necessarily a bad thing

Sullivan then pointed out that there are many cases where this “long-standing system of generating titles has helped pages with “terrible title tags.”

He talked about potential solutions for “problematic titles.”

Matt Southern refers to this as the “I really mean it” tag in SEJ’s coverage on Sullivan’s response.

Then finally, the following week on Tuesday, August 24, Google came forward about their web page title update, where it:

Where does this land us?

As with any algorithm update, it’s generally not a good idea to go into your pages and optimize for that particular update, but instead to make sure you’re focusing on quality across the board. But it will be important to pay special attention to your traffic and CTR to see if there are any fixes or optimizations you need to make. As we’ve seen, Google doesn’t always get it right when they try to “improve” on your work!

How about you? Has Google rewritten any of your titles? Share your stories in the comments below!

If you liked Google’s Title Rewrite Dropped Our CTR by Up to 37%! (Here’s How We Fixed It) by Kristen McCormick Then you'll love Miami SEO Expert

From Small To Large Companies, We Have Done It All!