It feels like just yesterday we were discussing issues like how to dispute Google Ad disapprovals or the new restrictions for Housing, Employment, and Credit policies.

And on July 20, 2021, we learned that come September, there’s going to be yet another twist in the plot of advertiser versus Google Ads policies, with Google’s new three-strike ad policy system.

Advertisers aren’t surprised, but they do have mixed feelings about this soon-to-be-launched pilot program, and the implications will vary depending on your account. So today, I’m going to cover everything you need to know, including:

With this information, you’ll have a better grasp of what to expect once the strike pilot gets introduced. Plus, an understanding of what to do if your account gets hit with the new penalties.

Google announced on July 20, 2021 that it will be piloting a new policy program in which repeat offenders of three of its current policies will get a series of penalties (strikes)—with the third strike resulting in indefinite account suspension.

If you’re familiar with Google Ads disapprovals, the three specific policies Google is piloting the system with won’t come as a shock to you:

How the Google Ads three-strikes system will work

The first disapproval you get for violating any of those three policies is a “warning” that will only impact the offending ads (they will be taken down until you change the copy). If you continue to violate that same policy, you’ll be entered into the strikes system which impacts your entire account.

The first strike comes into play if any portion of your ad violates the same policy you were previously warned about within 90 days of the original warning. This will result in a temporary hold on your account for three days—meaning none of your ads will run.

Once your three-day advertising “time out” is up, your account will continue to run as normal—but the violating ad will stay disabled until corrected.

You get a second strike if you violate that same policy again within 90 days of the first strike. Once the second strike is initiated, your account will be put into a longer, seven day time out.

For strikes one and two, you’ll be required to submit an acknowledgement form in addition to correcting the ad at fault.

Let’s say you manage to repeatedly violate the same policy again within 90 days of the second strike. The final third strike will result in account suspension for an indefinite period.

Google is so advanced in these policies that it even covers 3D printing of any of the unapproved products.  And remember, it’s not just your ad copy that could get a disapproval, but any content related to your account—including landing pages, images, and ad extensions.

So this may sound harsh, but considering the following details, it may not be not as harsh as you think:

When will Google Ads implement the strikes system?

“In the future, we plan to expand the strikes system in phases to scope more of our policies in. As we roll the program out globally, we hope to learn from early feedback to ensure we’re improving the process as we scale.”

The pilot will apply to all accounts across all countries. Of course, this will especially impact accounts that have struggled with those three policies in the past or already have approved yet questionable content running. But any account can get hit with strikes should they put up any violating content.

Reactions from the PPC community on the strikes pilot

When I browsed around #PPCchat, I found many advertisers unsurprised (as expected), but with varying sentiments.

The Google Ads platform has a notorious history of wrongly applied disapprovals and a frustrating support system. So, many advertisers are baffled as to why Google is doing this when the automated review process is already so flawed.

But they are having fun with it: 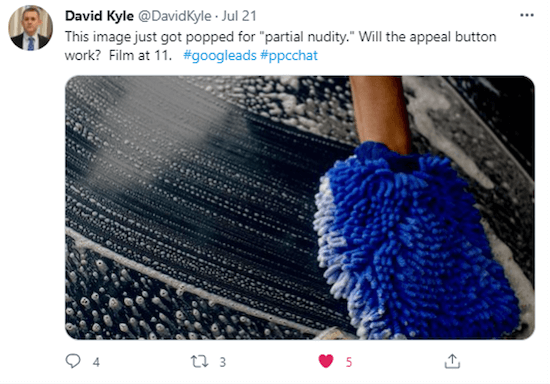 Some advertisers see this as a step in the right direction towards safety and security in the Google Ads space, but are frustrated with its current disapproval process.

A wish list of how it can/should be tweaked seems to be growing.

My take on all of this? It doesn’t seem like that big of a deal. These three policies are more severe than a minor grammar or capitalization disapproval. If you’re a repeat violator of promoting dishonest behavior, unapproved substances, or dangerous products/services, you probably shouldn’t be advertising on Google anyway.

And while 90 days may seem like a long “probation” period, you’re much less likely to inadvertently violate these pretty obvious policies.

Given my experience, I don’t see the average account being negatively affected because unless it’s in a high-risk industry, it most likely already abides by the rules. However, it could get annoying as more policies get incorporated, so my request to Google? Improve the disapproval detection technology to understand the context of the content.

And if you’re thinking this system sounds harsh

I even ran a little LinkedIn poll and the results (even though my sample size is tiny) are pretty aligned with my conclusion that no one is really surprised or worried, but more so wary or unsure.

You don’t have to start your September advertising efforts completely in the dark. Here are my recommendations for how you can get ready for this pilot—regardless if your account is at risk or not:

1. Appeal or resolve any outstanding disapprovals

Take this new initiative from Google as an opportunity as well as a reminder to review your account for any outstanding disapprovals.

You may as well sweep through and appeal or apply changes to rid yourself of any disapproved content so that you have less to worry about later—especially since Google mentioned plans for this system to incorporate other policies in future.

Save yourself a headache later and double check all of your digital assets for anything that could get picked up by the automated review system to play it safe.

As we know, it can be easy to get an incorrect disapproval. While some of that is on Google, we can focus on what we can control by removing or changing any verbiage or images that could even remotely pose a risk to those three policies.

A good rule of thumb is: if you’re questioning it, it’s probably best to change it.

While you’re at it, try our FREE Google Ads Performance Grader to get a full audit of your account!

While you’re in audit mode, run your account through our free Google Ads Performance Grader and learn how to save money and boost performance!

3. Roll out any new content prior to September if possible

This way, if anything does get disapproved for violation of one of those three policies, you save yourself a warning come September.

Remember, any time we make a change to ad copy (or roll out a new ad or ad extension) it automatically goes through Google’s review process. So if possible, try activating those campaigns now to test the waters of what does (or doesn’t) get approved. And if it doesn’t, you’ll have plenty of time to appeal it.

You can then pause the campaign until you’re ready to go live in September.

4. Set up advertising on other channels

As Google continues to build a no-nonsense policy structure, it’s becoming more important than ever to not rely on one single marketing channel. With the process for disapprovals continuing to be automated, you can’t always trust that bots will understand your ad context like a person.

In the event you do get disapproved—or worse, suspended—you’ll have peace of mind knowing you still have your brand awareness growing elsewhere while you resolve your Google issues.

5. DON’T make a backup account now or after your suspension

I’ll admit, I thought of the same exact workaround. If my account gets suspended for repeat disapprovals of these three policies, I can easily create a new account to try again, right?

Wrong. Google thought of everything already. In the same announcement, the platform promises that creating new accounts will result in more suspensions with the following statement:

So, should you be concerned about Google’s three-strikes ad pilot?

While advertisers aren’t surprised by the three-strikes program, many feel the disapproval and appeal processes need improvement. In my opinion, the policies it enforces are harder to inadvertently violate, so this shouldn’t have a major impact on the average account. But it all depends on your industry, what other channels you’re advertising on, and more. Either way, follow my tips to prepare and you can feel more confident when the pilot rolls out in September 2021!

From Small To Large Companies, We Have Done It All!